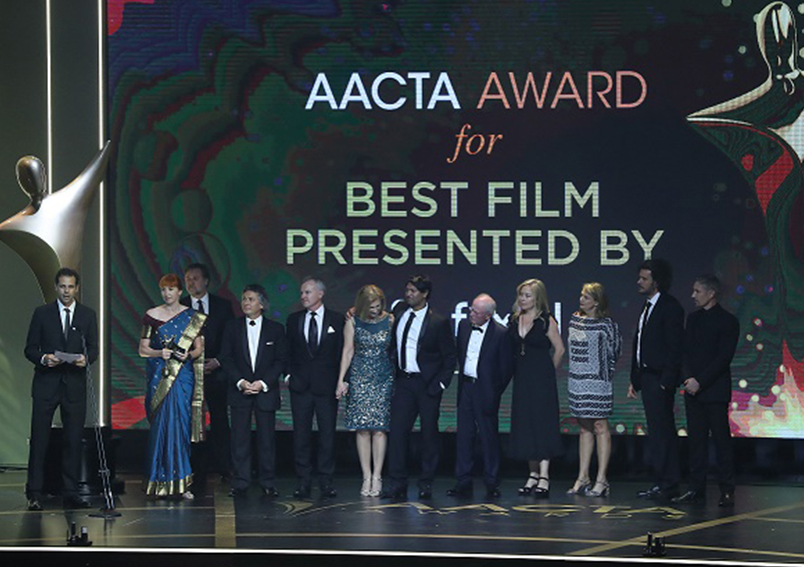 Every year, Australia’s screen luminaries gather in Sydney to attend Australia’s equivalent to the Oscars – the AACTA awards. The annual AACTA awards ceremony is Australia’s premiere event to celebrate excellence in film and television.

AACTA awards recognise the highest achievements of screen practitioners across 50 categories, as judged by the industry itself.

In the recent announcement of the 2018 nominees, marshalls+dent+wilmoth was excited to learn that 12 productions to which they provided legal services collectively received over 60 nominations.

We would like to congratulate each of these productions and wish them the best of luck:

RIOT (Telefeature) – 11 nominations
Riot tells the story behind Australia’s first Gay and Lesbian Mardi Gras – an event which changed the nation. At a time when homosexuality was still a crime, a group of activists show tremendous courage and face down adversity in organising the parade down Oxford Street.

MR INBETWEEN (Television series) – 6 nominations
Ray Shoesmith juggles the demands of being a father, ex-husband, boyfriend and best friend. It’s a hard balance to maintain, particularly when you’re a criminal for hire.

THE NEW LEGENDS OF MONKEY (Children’s Program) – 2 nominations
A valiant girl frees the Monkey King – a god long trapped in stone – so that he may help her in a quest to find the seven sacred scrolls that will save the world from evil.

LADIES IN BLACK (Feature Film) – 11 nominations
Set in the summer of 1959, when the impact of European migration and the rise of women’s liberation is about to change Australia forever, a shy schoolgirl takes a summer job at a prestigious department store in Sydney. There she meets the ‘ladies in black’ – her fellow sales ladies – who will change her life forever.

UPGRADE (Feature Film) – 7 nominations
After a violent mugging, Grey Trace – a stay-at-home mechanic – is left paralysed. Months later, he is visited by a famous tech innovator who offers to implant him with a chip that will allow him to regain control of his body.

CARGO (Feature Film) – 5 nominations
Amid a terrifying pandemic that is turning people into zombies, a father must search the wilds of Australia in order to find someone who is able to protect and care for his infant daughter.

WINCHESTER (Feature Film) – 3 nominations
Sarah Winchester, the widow of famed gun manufacturer William Winchester, lives as a recluse in her sprawling mansion haunted by the ghosts of people who have been killed by Winchester firearms.

THE MERGER (Feature Film) – 2 nominations
Things are tough in Bodgy Creek. People are moving away, there’s hardly any jobs now the timber mill has closed down, the drought never ends…and it looks as though the beloved local footy club may have to merge.

GURRUMUL (Documentary Film) – 5 nominations
A moving portrait of one of the most important and acclaimed voices to ever come out of Australia – Geoffrey Gurrumul Yunupingu.

GHOSTHUNTER (Documentary Film) – 4 nominations
A Sydney security guard and part-time Ghosthunter has spent twenty years searching for his absent father. When his search converges with a police investigation – he is forced to confront a horrific family secret.

Over the course of a day, a Melbourne courier struggles to maintain his normal deliveries while dealing with the demands of his loan shark and looking after his teenage son.

The true story of the early life of Australian rock star – Jimmy Barnes – based on his acclaimed 2016 memoir.

Image credit: The cast and crew from LION accepting the AACTA Award for Best Film presented by Foxtel at the 7th AACTA Awards. Getty Photography.